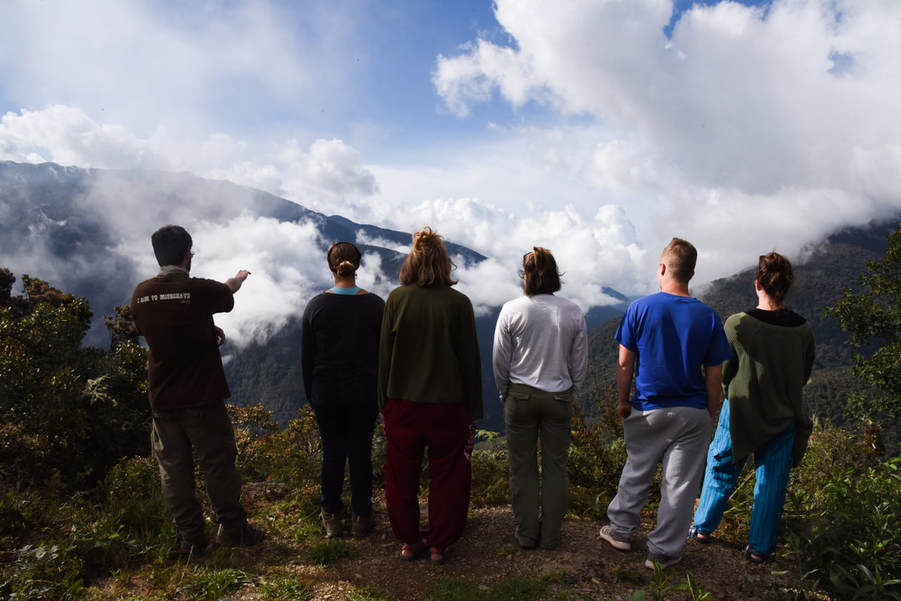 Students watch clouds move across the mountains at Wayqecha Biological Station in the cloud forest of Peru.

I momentarily panic as I place my backpack on the front seat of the van driving us to the rainforest. On the floorboard is a small pistol. The remote cloud forest research station we were supposed to be visiting for the next couple of days has recently been used as a hideout for a nightlong road robbery. Friends and colleagues were held at gunpoint, silenced and separated  as the thieves searched the research station and pulled cars over on the only road to the jungle. Will and I on our last ride up from the jungle missed the robbery by a day. Upon closer inspection I realized it was just a black plastic gun, probably kept to use as a decoy by the driver. Needless to say everyone is a bit jumpy.

We pile into cars and drive the winding road down into the Amazon, this time we travel with the study abroad program Will teaches with. This means the ride is with a safe, trusted driver who drives slowly and is good at spotting wildlife. He spies two Quetzals on the drive down, beautiful green, blue and red birds that live in just a thin sliver of elevation.

When we finally arrive at Villa Carmen, it smells like home; of wild ginger, and overripe guava. This place is the closest thing to a permanent residence I’ve had the past 2 years. Strange that you can make a home of the rainforest.

I wake up ready to do a quick trail loop before breakfast but find rain, light but enough to keep wildlife in hiding and me too. Instead Will and I sit on the porch or our bamboo cabin and write. This wide porch with its high view of the small swamp and bamboo stand behind our house may be one of my favorite places in the world. We often sip coffee, talk, plan and bird watch.

A kingfisher dive bombs the small pond in the swamp, missing its target and then preceeds to loudly cackle; and I imagine complain about the loss. Extraordinary species pass through this privileged window into the Amazon. If you sit quietly enough you can hear the nearby river. In the evenings we often hear the beating drums from the nearby indigenous community, which layers the already exotic soundtrack of the rainforest.

When I finally make it onto the trails after the rain lessened, they are overgrown, unwalked and unloved and especially wild. I know this will change in the next few days as the station’s workers clear the trails for the students. So for now I enjoy the feeling of being a voyeur, traversing spaces populated solely by wildlife.
​
360 Video: Explore a trail and see the mirador at Villa Carmen Biological Station
March 23, 2017

Some mornings I wake up with an irresistible urge to be on the trails, to see what’s new and what has changed overnight. I’m still bleary eyed when I almost step on a small snake in the middle of the trail who does not seem keen to move from its spot. Even once I register that it is not venomous, it’s hard to shake that instinctual fear that bubbles up inside me.

After breakfast despite the drizzling rain I decide to hike up to trail 9 where there is a dip in the trail, my favorite place to put a camera trap. This trail is one of the steepest, gaining  several hundred meters in elevation in under a kilometer. It is already a slick trail but in the rain, the wet leaf litter slides away from the clay underneath and I am quickly covered in mud, glad only the animals can see my ungraceful scrambling.

A late afternoon hike with Will and students to lay nets to collect night monkey poop samples for parasitology labs, leaves a student with a bamboo barb piercing through the cartilage in his ear. He was remarkably calm as Will pulls the piece out with gloves and tweezers. The jungle deserves respect, always.
​
​March 25, 2017

Today I joined the students on a visit to the nearby indigenous community Huacaria, where Amazonian Wachiperi and Machiganga and Andean Quechua families created a permanent community several decades ago. When we first arrive, tiny school children dressed in traditional clothes grab our hands and lead us to our seats while the older boys preform a dance. One of the mothers of the children then sings a haunting song in Wachiperi that seems to float up into the sky. It’s moments like these when I can believe in the magic and mysticism of the rainforest.

Later we watch as community members catch paco (relative of the piraña) from aquaculture ponds. The fish is wrapped in large leaves and steamed in sections of bamboo over an open fire. Later we eat it with boiled yucca and heart of palm salad. The fish is incredibly flavorful.

After lunch we watch demonstrations on how to make baskets and arrows and then take turns making necklaces and shooting arrows at a target outside. Finally, we go swimming in the locally famous Huacaria swimming hole. It is perfectly clear, cool and deep.
March 27, 2017

The morning begins at 5:30am, when the neighboring night monkey family passes by the trees above our cabin, returning home after their night out searching for food. I lie in bed listening to them. I find their presence comforting; their routine in a fluctuating environment, stabilizing.

This family has a new fluffy baby. It is incredibly curious and turns upside down to look at me later while I film. This family of four is the largest of the nine groups we’ve seen at Villa Carmen. Later we spot two more new babies in other families. It’s encouraging to see a species do so well in secondary forest. It feels like a small conservation win.

I am walking quietly on one of my favorite trails when my obnoxiously loud Peruvian cell phone rings. I keep this phone with me on the trails in case of an emergency.  One of Will’s colleagues is looking for him. “I’m on the trails,” I say. “I have no idea where he is.” I’m trying to get off the phone, when I turn and see a beautiful red brocket deer emerge from the forest (my first ever). She pauses and stares at me with her liquid brown eyes and I cradle the phone to my ear as I stealthily try to raise my camera to photograph her. I’m still dumbly talking into the phone, but the deer seems unperturbed and calmly crosses the trail before disappearing into the forest.
​
​​March 31, 2017

I measure success on the trails in terms of footprints, night monkey poop samples and camera trap images. Often you may not see wildlife in the Amazon, but you can celebrate the impressions of them. So when I collect two samples, find jaguar paw prints, peccary, rabbit, paca (mid-sized rodent) and jaguar images on my camera trap before breakfast, I do a little dance.

Later I pop into Will’s class and show them these camera trap images, which come from the trap I set up with them earlier in the week. The jaguar appears in the last few images and their surprise and delight was something to cherish. The images are only from behind but the very presence of the jaguar so close to the station is a small happiness.
​
360 Video: Cross the Piñi Piñi River in a Cablecar
​​April 1, 2017

My solo morning hike to film was hijacked by two students. I was catching my breath on trail 9 just before reaching the mirador when I spot them coming up the trail. They had been running after me for nearly a kilometer because they aren’t allowed on the trails in just pairs of two. “We didn’t realize how fast a hiker you are,” they said panting. I decided not to mentioned that I left later than I wrote on the outing board and that I was walking slowly today.

This three hour loop is always beautiful and special. We hike through the clouds at the top of the ridge and descend into a small patch of elfin forest (miniaturized, and lichen and moss covered trees).

We spot two night monkeys. The baby hops on its parent’s back before disappearing into the bamboo. Just a few more meters down the trail we come across capuchins monkeys, who chatter to one another. It’s always a gratifying to see wildlife at the end of a hike when you’ve given up on seeing anything and are focused on home.
​​April 2, 2017

We get up early to cross the Piñi Piñi River by the hand-pulled cablecar. The oroya as it’s called in Peru is sketchier than normal at the end of this rainy season. The frayed rope we use to pull ourselves across is tenuous at best, but the students are lighthearted and the mature forest on this side of the river radiates green this morning.

Alongside Will and his collegues I am helping lead students in separate groups to search for monkeys. It’s slow, quiet walking but the trails seem to yield no wildlife. We finish the survey and are talking loudly and walking back to the oroya  when Will spots a troupe of charismatic squirrel monkeys. They make high-pitched squeals and we watch them for half an hour transfixed.
​
​​April 4, 2017

All the students and staff left on a day trip to a neighboring research station and I revel in a quiet day alone at the station. I wander the trails unrushed and film the old abandoned Russian airplane that has become a bit of legend at Villa Carmen. Many visitors just stop by the station to see this decaying airplane being reclaimed by the jungle.
​
360 Video - Explore an Russian Airplane Abandoned in the Jungle
​​April 5, 2017

Will, our friend Hillary, and I decide to visit Dos Loritos, the local animal rescue this morning on our last day in the jungle. We take a mototaxi ride up to the center and are immediately greeted by a tiny baby night monkey. After observing and filming night monkeys for two years, it is such an amazing experience to be able to hold one and study it up close. Will makes some monkey chirps and Salterino like many monkeys before him takes to Will immediately. He clings to the back of Will’s head. His small padded hands remind me of frog feet and his soft wooly fur of a lamb

​I am handed a baby sloth, Mochila (backpack) by the animal’s keeper Victoria and she grasps me with her small claws and starts licking me. We meet a baby crab eating raccoon, a baby woolly monkey, peccaries, capybaras, a macaw and a tapir. Despite the sad circumstances that caused many of these animals ended up here (illegal pet trade and poaching), the center celebrates many successful rehabilitation stories.
April 6, 2017

Hillary and I slip in one last hike before leaving for Cusco, but we end up soaked before we get back to the station as the sky wrings out more rain. Thunder cracked and roared last night shaking our bamboo cabin. You feel so impossibly small and insignificant in such moments. Fear and adventure I am finding are hopelessly intertwined companions.
​
Special thanks to Villa Carmen Biological Station, ACA and Nikon! Nikon Key Mission camera provided by Nikon Inc., Melville, New York.
​© 2018 Jessica Suarez, All Rights Reserved
Proudly powered by Weebly