A carbon footprint is defined as the total emissions caused by an individual, event, organisation, or product, expressed as carbon dioxide equivalent. Most of the carbon footprint emissions for the average U.S. household come from "indirect" sources, i.e. fuel burned to produce goods far away from the final consumer. These are distinguished from emissions which come from burning fuel directly in one's car or stove, commonly referred to as "direct" sources of the consumer's carbon footprint. Those countries with the largest footprint include the United States and China; however per capita measurements show a much different picture.

CO₂ emissions per capita, 2016 Average carbon dioxide (CO₂) emissions per capita measured in tonnes per year. Click for interactive graphic.
​On pure emissions alone, the key points are:
• China emits more CO2 than the US and Canada put together - up by 171% since the year 2000
• The US has had declining CO2 for two years running, the last time the US had declining CO2 for 3 years running was in the 1980s
• The UK is down one place to tenth on the list, 8% on the year. The country is now behind Iran, South Korea, Japan and Germany
• India is now the world's third biggest emitter of CO2 - pushing Russia into fourth place
• The biggest decrease from 2008-2009 is Ukraine - down 28%. The biggest increase is the Cook Islands - up 66.7% 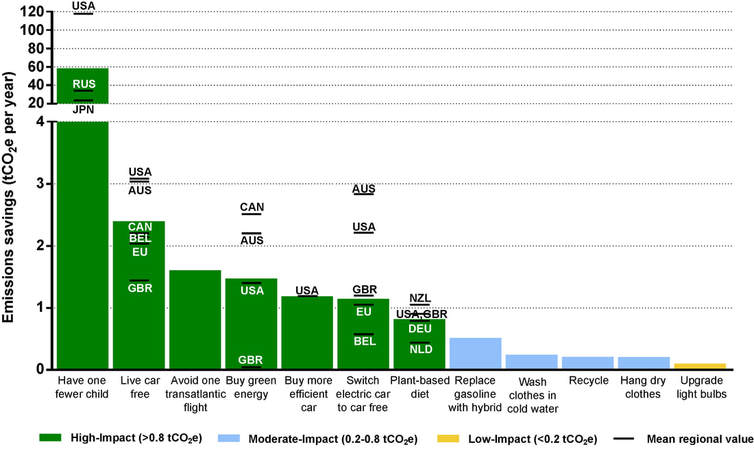 Many studies have linked export-intensive industries with biodiversity threats, for example, coffee growing in Mexico and Latin America, soya and beef production in Brazil, forestry and fishing in Papua New Guinea, palm oil plantations in Indonesia and Malaysia, and ornamental fish catching in Vietnam, to name but a few.

Flow map of threats to species caused by exports from Malaysia (reds) and imports into Germany (blues). Note that the lines directly link the producing countries, where threats are recorded, and final consumer countries. An interactive version is available at http://www.worldmrio.com/biodivmap/.
Local threats to species are driven by economic activity and consumer demand across the world (Lenzen 2012). Consequently, policy aimed at reducing local threats to species should be designed from a global perspective, taking into account not just the local producers who directly degrade and destroy habitat but also the consumers who benefit from the degradation and destruction.

Allocating responsibility between producers and consumers is not straightforward. Producers exert the impacts and control production methods, but consumer choice and demand drives production, so that responsibility may lie with both camps, and should have to be shared between them. The consumer responsibility principle is now receiving ample attention in the climate change debate. Its political relevance is demonstrated by China’s official stance that final consumer countries should be held accountable for the greenhouse gases emitted during the production of China’s export goods.

Ending with consumers, environmental labels such as advertising dolphin-safe canned tuna, organic produce and fair trade coffee have
been a well-known sight for decades. Although these examples refer to relative short, intuitively traceable supply chains, there is in principle
no obstacle to extending such labeling and certification to more complex international trade routes. This is demonstrated by the United
Kingdom’s Carbon Reduction Label, which despite shortcomings requires the quantification of a product’s full carbon footprint. Given the complete equivalence of carbon and biodiversity footprinting methodologies, integration of species Red Lists with global trade databases could provide a starting point for more comprehensive biodiversity labeling schemes. However, whether sustainability-minded consumers and shareholders can be a force in mitigating the impacts they drive will depend on whether sustainability certification schemes will be able to overcome their current limited efficacy.
Resources
The climate mitigation gap - education and government recommendations miss the most effective individual actions; Lenzen, M., et al. (2012). ​International trade drives biodiversity threats in developing nations. Nature, 486(7401), 109.