Plastics pollution has a direct and deadly effect on wildlife. Thousands of seabirds and sea turtles, seals and other marine mammals are killed each year after ingesting plastic or getting entangled in it. Endangered wildlife like Hawaiian monk seals and Pacific loggerhead sea turtles are among nearly 300 species that eat and get caught in plastic litter.

We're surrounded by plastic. Think about every piece you have touched every single day of your life: grocery bags, food containers, coffee cup lids, drink bottles, straws for juice boxes — the list goes on and on. All of it still exists, whether you think about it or not. It will not break down for thousands of years (depending on the type of plastic).  Plastic may be convenient, but its success carries a steep price. In the first decade of this century, we made more plastic than all the plastic in history up to the year 2000. And every year, billions of pounds of plastic end up in the world's oceans.  Yes, recycling can allow some plastics to be reused, but the vast majority of plastics produced are either not recyclable or they never make it to a recycling facility.

Most ocean pollution starts out on land and is carried by wind and rain to the sea. Once in the water, there is a near-continuous accumulation of waste. Plastic is so durable that the EPA reports “every bit of plastic ever made still exists.”  Due to its low density, plastic waste is readily transported long distances from source areas and concentrates in gyres, systems of rotating ocean currents. All five of the Earth's major ocean gyres are inundated with plastic pollution. But it's not limited to the gyres; studies estimate there are 15–51 trillion pieces of plastic in the world's oceans — from the equator to the poles, from Arctic ice sheets to the sea floor. Emerging research suggests that not one square mile of surface ocean anywhere on earth is free of plastic pollution. 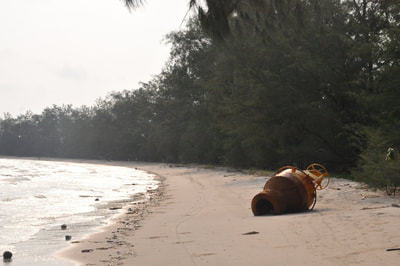 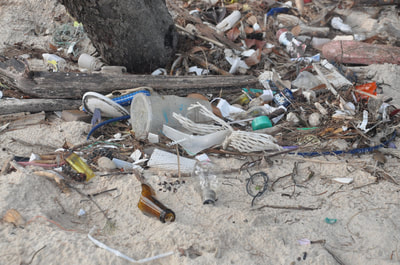 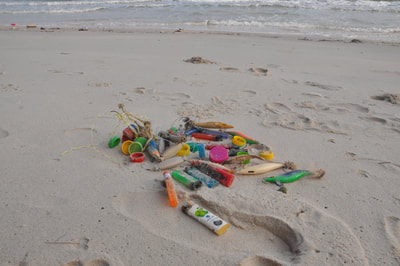 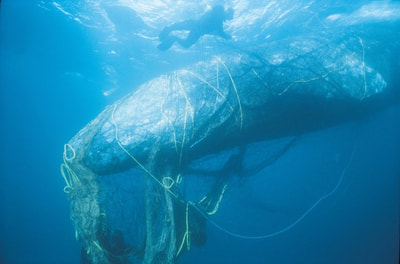 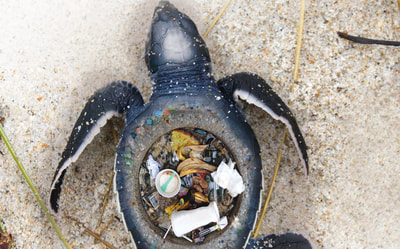 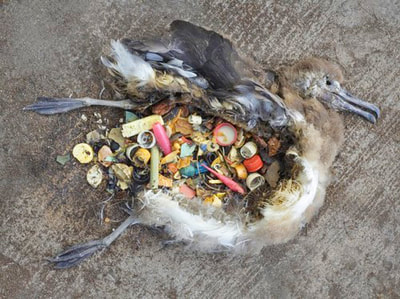 Thousands of animals, from small finches to great white sharks, die grisly deaths from eating and getting caught in plastic:
Mekong countries of China, Thailand, and Vietnam are among five countries in the world (Indonesia and the Philippines are the other two) that collectively dump more plastic into the oceans than the rest of the world combined. Plastic-fed lifestyles are proliferating across the Mekong neighborhood. An estimated 200 tonnes of plastic waste is being dumped into Myanmar’s waterways every day. Cambodian households use ten times more plastic than their counterparts in more developed economies, and plastic has become a challenge to increasingly prosperous Laos. The world’s plastic crisis in the Mekong region

Unfortunately, More Recycling Won't Solve Plastic Pollution, and Big Business Wants You To Think It’s Fixing The Plastic Crisis. The biggest plastic polluters include Coca-Cola, PepsiCo, and Nestlé based on cleanups and brand audits spanning 42 countries and six continents (Greenpeace 2018).  In 2019, Coca-Cola products were the greatest contributor to plastic waste world-wide (BreakFreeFromPlastic), They are well aware of the problem and there is increasing pressure to eliminate their contribution to the global problem (Laville 2019). So what can be done by corporations and consumers?

Several steps need to be taken:
1) Say no to plastic. Zero waste. Instead of trying to reduce waste by a small fraction, some individuals and communities are shifting their lifestyles to ensure that nearly everything is reused, recycled or composted. If that's not possible, then start by choosing to reuse. Skip the plastic utensils at your favorite lunch spot. Instead, opt for a set of reusable forks, spoons, and knives that you can use every day of the week.

2) Include a ban or “opt-in” policy on single-use items like plastics. While plastic bags, bottles, and other items that we use just once and then throw away may be convenient at the moment, using canvas bags or reusable bottles helps cut plastic pollution. By using glass and/or metal jars for storage, packed lunches, soaps, and beauty products, you can also cut back on your plastic waste. You can also help organize a plastic-free town. Find details here at Plastic Pollution Coalition.

3) Persuade the wealthiest, most profitable corporations in the world to completely change the way they make plastic and package consumer goods. The problem is that most companies feel their responsibility ends the moment they sell it. First step, regular beach cleanups, which helped bring attention to the problem even if the beaches were covered with trash again a few months later. But also compile a list of the brand logos emblazoned on the plastic trash and publicize them for all to see. Here's an example, An Island Crusader Takes On The Big Brands Behind Plastic Waste.

4) UPDATE! There is recent news that some states are forcing plastics producers to incur the cost associated with recycling. Read more. This is a big step forward. Legislators need to make laws that incentivize and facilitate recycling, like the national bottle deposit and bag tax bills that were proposed in 2009. These bills would have created a nationwide five-cent deposit on plastic bottles and other containers, and a nonrefundable five-cent charge on plastic bags at checkout. “The only way we solve the problem is if we reduce the use of plastic in the first place, and single-use consumer goods packaging is really the place where we need to do that,” says Jacqueline Savitz of the environmental nonprofit Oceana (Lim 2018). Here's a tool to help you find your representative in the United States, in Europe, in the United Nations. Ask your representatives to discuss strategies for combating plastic pollution. For example, find out whether your country has banned microbeads in personal care products, and if they haven’t, send a letter urging action. Tweet them, Facebook them, call them, and show up to community organized events. Tell your politicians your concerns about the plastic pollution crisis and listen to their responses. Be persistent.

​5) Circular economy model: waste is minimized by planning in advance. Materials can be reused and recycled at a product’s end of life rather than finding a solution at the end of its life. For example, Dell and HP computers have sourced single-use plastic bottles from Haitian beaches since early 2017. HP has diverted some 250 tons of ocean-bound plastic to date (Lim 2018). Recycling alone won't save the planet. Rather, we have to ensure that all products created have a way to be recycled, reused, or repurposed (The solution to the plastic waste crisis? It isn’t recycling).


Resources
Center for Biological Diversity
Scientific America
A Running List of Action on Plastic Pollution
Take Action: Microbeads
The problem with plastic in nature and what you can do to help
Guide to marine plastic pollution
​
News
We never got good at recycling plastic. Some states are trying a new approach
Coca-Cola named most polluting brand in global audit of plastic waste
Proudly powered by Weebly