The world loses about 158,000 square kilometers (39 million acres) of tropical forest each year
Tropical countries lose an enormous amount of tree cover each year. 2017 was the second highest rate since the dataset began in 2001, and only a bit lower than the record high in 2016. Brazil came out on top for the most tree cover lost of any tropical country.

Just four commodities--beef, soy, palm oil, and wood products—drive the majority of tropical deforestation.
​
Why does deforestation matter? Forests—especially tropical forests—store enormous amounts of carbon. When forests are destroyed, that carbon is released to the atmosphere, accelerating global warming. Deforestation accounts for around 10% of total heat-trapping emissions—roughly the same as the yearly emissions from 600 million cars. In addition to storing carbon, forests provide important habitat for a long list of endangered species—and they offer many other benefits, such as clean water, forest products, and livelihoods for indigenous communities. These forests are also home to most biodiversity hotspots - areas with exceptionally high levels of species richness and are threatened by humans. With large areas of cheap land, relatively low labor costs, and a year-round growing season, the tropics have become a favored location for large-scale industrial commodity production. Eliminating emissions from commodity-driven tropical deforestation can play a huge role in reducing climate change—and we can do it in the near future.

The following four commodities are the largest drivers of deforestation. Together, they have an exceptionally large impact on the health of our world’s forests, loss of biodiversity, and change in climate, resulting in over 3 million hectares of deforestation each year - equivalent to about the size of Switzerland. 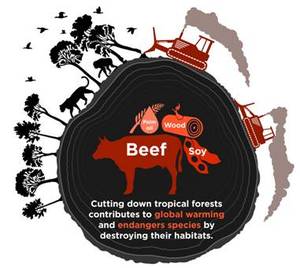 Beef cattle
Of the four major deforestation drivers, beef has by far the largest impact. Converting forest to pasture for beef cattle, largely in Latin America, is responsible for destroying almost 3 million hectares of tropical forest each year—an area about the size of the state of Massachusetts. This is more than half of tropical deforestation in South America. Brazil, Indonesia, the Democratic Republic of Congo (DRC), and Malaysia have had the highest rates of rainforest loss between 2012 and 2014, which is disconcerting because Brazil, DRC, and Indonesia have the largest tropical forests in the world.

​Soybeans
Growing global demand for meat and dairy products has contributed to the doubling of soybean production in the last 20 years. Soy is primarily used to feed pork, poultry, and dairy cows, though significant amounts are also used to produce vegetable oil and biodiesel. Large soybean fields in the tropics, particularly in Latin America, are often planted on newly deforested land—or they may expand onto former pastureland, pushing cattle to the forest frontier. Every year around 480,000 hectares is deforested for soy in major soy-producing tropical countries.

Palm oil
Palm oil is used in countless processed foods and personal care products, as well as biofuels and vegetable oil. Produced largely in Southeast Asia, palm oil packs a powerful climate punch, not only because of the amount of land deforested annually (270,000 hectares in three leading countries), but also because much of this area includes the carbon-rich soils known as peatlands. Peatlands contain up to 28 times as much carbon as the forests above them—carbon that's released to the atmosphere when peatlands are drained for oil palm plantations. As a result, palm oil contributes the most global warming emissions of any commodity besides beef.
Wood products
Perhaps the most iconic symbol of forest destruction, wood production has been shown to cause around 380,000 hectares of deforestation annually in key countries, though the actual number is likely higher. Wood products can be divided into two categories. Pulp is made from tree fibers and used to produce paper and related products. It drives deforestation primarily in Indonesia, where forests are cut down for plantations of fast-growing tree species. Timber, used for construction or high-end products like furniture, is most clearly linked to forest degradation, in which valuable tree species are harvested and the rest remain. Degraded forests are more likely to be targeted for conversion to other land uses. 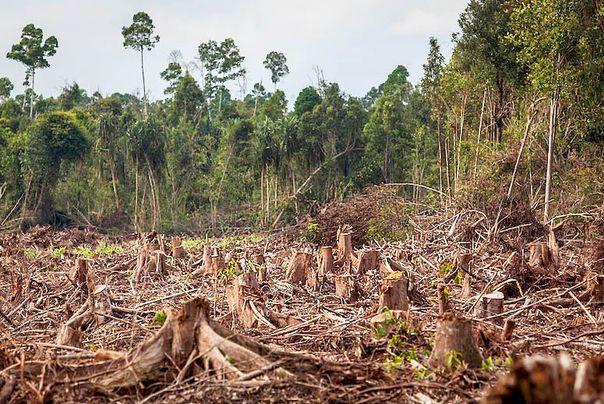 Because these commodities are in so many widely used consumer products, changing the way they are produced could have huge benefits for the climate, forests, and people around the world. And this change is possible—there are strategies to produce beef, soy, palm oil, and wood products in ways that allow the world’s forests to thrive.
​
Already innovative governments and companies have begun taking real steps toward protecting forests from destruction. Deforestation in the Brazilian Amazon fell by 70% from 2005 to 2014, largely thanks to temporary agreements by processors and exporters to stop buying cattle or soy linked to deforestation in the region. Some companies have made commitments to ensure that future sourcing of their commodities (most often palm oil) will be free from deforestation. 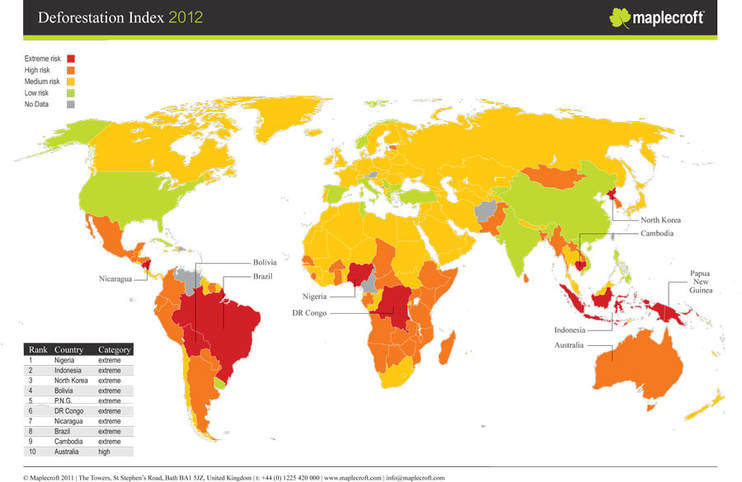 Forest degradation is responsible for about 20% of global greenhouse emissions and considered a key contributor of climate change. The 9 countries where economic growth, poverty, corruption, and the increasing use of biofuels pose the greatest risk to the world’s forests include: Nigeria, Indonesia, North Korea, Bolivia, Papua New Guinea, DR Congo, Nicaragua, and Brazil.
​
Yet these temporary and partial measures are not enough. As deforestation in the Brazilian Amazon has decreased, we must stem the tide of deforestation in other ecosystems and other countries. Major companies that operate in forested regions, or source products from them, must commit to ending deforestation for all their operations. When companies make these commitments—and follow through on them—they finally begin to show that destroying forests, reducing habitat, and contributing to global warming can no longer be business as usual.

So which companies are driving deforestation? Carbon Disclosure Project (CDP) suggests almost a quarter of company revenues depend on deforestation-linked commodities. Forest 500 is the world’s first rainforest rating agency. It identifies and ranks the most influential companies, financial institutions, and governments in forest risk commodity supply chains as we shift to a deforestation-free economy. Specific methodologies and indicators have been developed for each powerbroker type. The indicators cover overarching cross-commodity zero deforestation commitments, commodity-specific policies, as well as the scope of commitments and whether progress is reported transparently.


Where are species most at risk? New biodiversity maps help prioritize conservation objectives.

​Global Forest Watch (GFW) is an online platform that provides data and tools for monitoring forests. By harnessing cutting-edge technology, GFW allows anyone to access near real-time information about where and how forests are changing around the world.
Deforestation leads to the obvious removal of habitat and directly contributes to climate change. But it also has other equally serious impacts associated with habitat fragmentation, disease ecology, and mass extinction - all contributing to biodiversity loss.