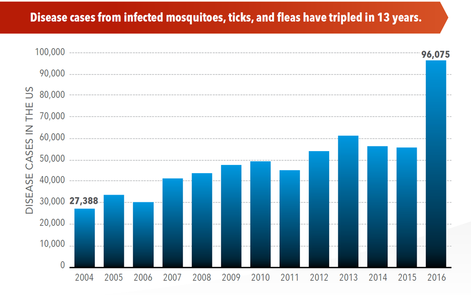 SOURCE: CDC Vital Signs, May, 2018
EMERGING INFECTIOUS DISEASES
​Infectious diseases caused by tick, mosquito and flea bites more than tripled in the US between 2004 and 2016, and 9 new diseases were either discovered or detected for the first time during that same period. It is widely accepted that temperatures and rainfall affect the abundance of mosquitoes, spread of pathogens, and incidence of disease. Recent outbreaks include Zika, chikungunya, and West Nile viruses. Various factors influenced by people are likely to drive changes in vector distributions, and subsequently, infectious diseases. For a review, please read: Human drivers of ecological and evolutionary dynamics in emerging and disappearing infectious disease systems
​
CLIMATE CHANGE
There are three categories of research into the linkages between climatic conditions and infectious disease transmission. The first examines evidence from the recent past of associations between climate variability and infectious disease occurrence. The second looks at early indicators of already-emerging infectious disease impacts of long-term climate change. The third uses the above evidence to create predictive models to estimate the future burden of infectious disease under projected climate change scenarios.

There is considerable evidence of associations between climatic conditions and infectious diseases. Malaria is of great public health concern, and seems likely to be the vector-borne disease most sensitive to long-term climate change. Malaria varies seasonally in highly endemic areas. The link between malaria and extreme climatic events has long been studied. Recent analyses have shown that the malaria epidemic risk increases around five-fold in the year after an El Niño event.

Other evidence:
And the impacts of changing disease ecology on wildlife is also evident:
DEFORESTATION
Studies assessing parasitism in wild primate populations have emanated from an interest in zoonotic pathogen transmission, conservation of host species, and ecosystem health. Modified landscapes due to anthropogenic disturbances have led several researchers to test whether intestinal parasites of host populations vary in response to habitat alteration. However, despite various efforts to understand the impact of forest degradation on parasite communities in primates and other wildlife, there still remains the unanswered question of whether specific anthropogenic disturbances affect parasite communities and the degree to which they do so.

Both zoonotic transmission of pathogens and composition of parasite communities in mammals have been linked to human disturbances. In particular, parasite species richness and prevalence of several intestinal parasites have been reported to be higher in selectively logged and forest fragments compared to primary habitat; however, there are several cases where no effect was found – particularly as it relates to primates. 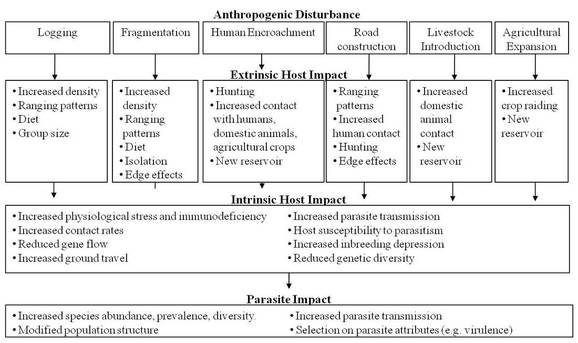 Hypothesized anthropogenic disturbances and associated impact on host and parasite communities. For any one ecological disturbance there are numerous potential pathways and impacts (both extrinsic and intrinsic). The end result is a modification of parasite communities. Relevant to this study, primates are largely thought to be directly impacted by forest degradation and loss, and hunting. However, these same disturbances can have an indirect impact on primate parasitism.
Results of a meta-analysis of howler monkey parasitism research revealed that human proximity and habitat disturbance were not found to have an effect on parasite species richness and the presence of most intestinal parasites, though this finding may be due to these studies not assessing habitat disturbance quantitatively. Rather, forest types were characterized dichotomously (e.g., continuous vs. fragmented forest types).

Interactions between the environment, parasites, and hosts are dynamic and complex. Two major anthropogenic factors likely driving intestinal parasitism are forest fragmentation as a result of logging, and human encroachment. In the case of forest fragmentation, there are several hypotheses. First, travel routes can be limited, bringing individuals into greater contact with contaminated foliage or forcing them onto the ground where they are more likely to come into contact with soil-transmitted pathogens. Groups may also be forced into smaller areas, thereby increasing density, contact rates and subsequent parasite exposure. Edge effects along logged forests can also inhibit or enhance parasitism through altered environmental conditions such as temperature or moisture levels, or increased physiological stress associated with degraded habitats could make individuals more prone to infection. Fragmentation can also limit individual dispersal between groups or populations which could conceivably force groups into “genetic islands” – limiting their ability to recruit new members and ultimately leading to inbreeding depression. The effect of inbreeding depression on wild primate parasite communities is unknown, though evidence from captive studies suggests that there is an association between loss of genetic diversity and higher prevalence and abundance of certain parasites. Forest fragmentation has also been shown to affect food availability. As a result, host nutrition could be impacted by reduced habitat quality which increases the propensity for infection. Likewise, lower density food resources are associated with larger home ranges, forcing individuals to travel further, increasing their encounters with more parasites, and in turn leading to higher parasite abundance and prevalence.

The second major factor driving intestinal parasitism in wildlife is human encroachment. As people and communities expand into largely untouched ecosystems, chances for zoonotic transmission are likely to increase. For example, primates living on the forest edge of fragmented habitats see increased contact with agricultural plots and areas with domestic animals – both potential sources of intestinal parasites. Wildlife may also be more likely to acquire parasites from local human communities due to physical proximity. For example, humans and nonhuman primates interacting in the wild have been shown to share genetically similar Escherichia coli. Colobus and guenons are also possible reservoirs for zoonotic transmission of Giardia and Cryptosporidium species. 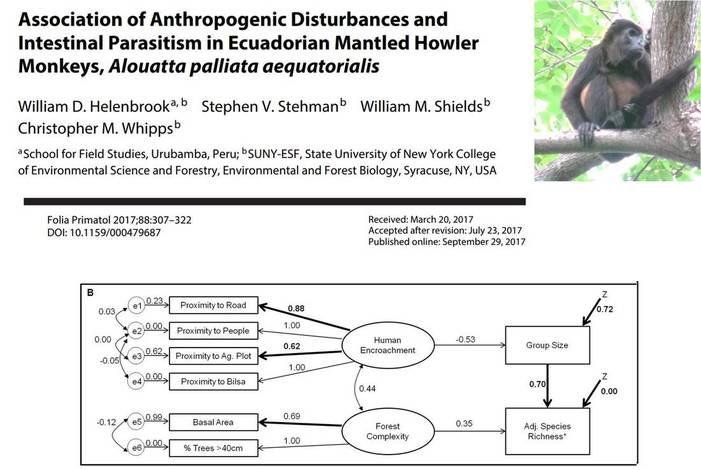 Best-fit SEMs for overall species richness (a) and adjusted species richness (b) taking into account group sample size. Similar to species richness models, Controrchis sp. infections were dependent on a combination of group size, human proximity (indirectly), and forest disturbance measurements (directly). Forest disturbance was not significantly associated with the presence of individuals infected with Entamoeba spp.; rather, group size was a driving force which was influenced by human proximity measurements.
WILDLIFE TRADE AND BUSHMEAT CONSUMPTION
​
​Relevant Studies
Proudly powered by Weebly