​The world is dealing with an unprecedented spike in illegal wildlife trade, threatening to overturn decades of conservation gains. It is second only to habitat destruction in overall threats against species survival. Ivory estimated to weigh more than 23 metric tons—a figure that represents 2,500 elephants—was seized in the 13 largest seizures of illegal ivory in 2011. Poaching threatens the last of our wild tigers that number around 3,890.

Wildlife crime is a big business. Run by dangerous international networks, wildlife and animal parts are trafficked much like illegal drugs and arms. By its very nature, it is almost impossible to obtain reliable figures for the value of illegal wildlife trade. Experts at TRAFFIC, the wildlife trade monitoring network, estimate that it runs into hundreds of millions of dollars.

Some examples of illegal wildlife trade are well known, such as poaching of elephants for ivory and tigers for their skins and bones. However, countless other species are similarly overexploited, from marine turtles to timber trees. Not all wildlife trade is illegal. Wild plants and animals from tens of thousands of species are caught or harvested from the wild and then sold legitimately as food, pets, ornamental plants, leather, tourist ornaments and medicine. Wildlife trade escalates into a crisis when an increasing proportion is illegal and unsustainable—directly threatening the survival of many species in the wild. 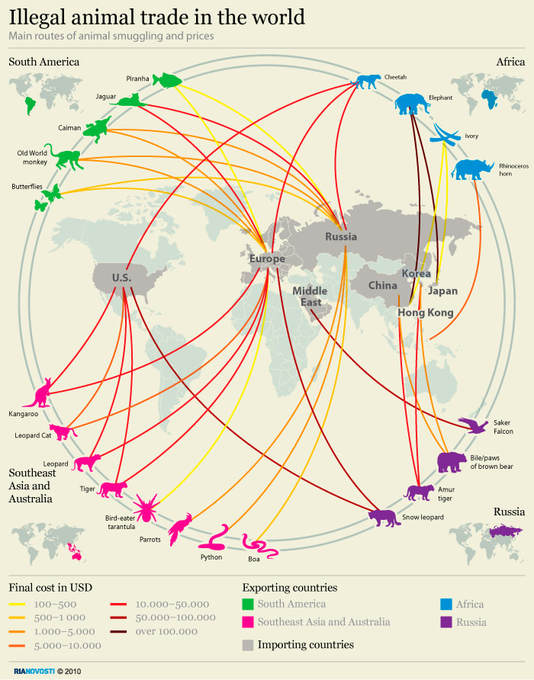 ​DEMAND DRIVES CRIME
Rhino horn, elephant ivory and tiger products continue to command high prices among consumers, especially in Asia. In Vietnam, the recent myth that rhino horn can cure cancer has led to massive poaching in South Africa and pushed the price of rhino horn to rival gold.

GAPS IN PROTECTION
Corruption, toothless laws, weak judicial systems and light sentences allow criminal networks to keep plundering wildlife with little regard to consequences. These factors make illegal wildlife trade a low risk business with high returns. The poachers—often poor locals—are the usually the only ones caught, leaving the real masterminds and their network safe and operational with the ability to strike again

There are certain places in the world where wildlife trade is particularly threatening. These areas are called “wildlife trade hotspots.” They include China's international borders, trade hubs in East/Southern Africa and Southeast Asia, the eastern borders of the European Union, some markets in Mexico, parts of the Caribbean, parts of Indonesia and New Guinea, and the Solomon Islands. While these hotspots might be trouble areas at present, they also offer opportunities for great conservation success, if action and funds are well-focused. Wildlife trade alone is a major threat to some species, but its impact is frequently made worse by habitat loss and other pressures.

ALTERING LIVELIHOODS
Local wildlife is considered an important resource by many communities, often the poorest, in the developing world. Some rural households depend on wild animals for protein, trees for fuel, and both wild animals and plants for natural cures.

INTERRUPTION OF NATURE
Overexploitation of species affects the living planet in wider ways. Just as overfishing causes imbalances in the whole marine system, our complex web of life on earth depends on careful and thoughtful use of wildlife species and their habitats.

INVASIVE SPECIES
Many invasive species have been purposely introduced by wildlife traders or buyers. These invasive species prey on or compete with native species and are a major threat to the balance of nature. For example pet Burmese pythons let loose by their owners are now considered a major pest in Florida’s everglades.

INCIDENTAL KILLING OF NON-TARGET SPECIES
Like marine species killed through bycatch, incidental killing of animals also happens on land. For example, crude traps set for musk deer or duikers cause damage and death to a variety of animals besides those intended.

What can you do to help?
Push governments to protect threatened animal populations by increasing law enforcement, imposing strict deterrents, reducing demand for endangered species products and honoring international commitments made under CITES.
​
Speak up on behalf of those on the frontlines being threatened by armed poachers so they are properly equipped, trained and compensated.
Reduce demand for illegal wildlife parts and products by encouraging others to ask questions and get the facts before buying any wildlife or plant product.

Illegal Wildlife Trade Examples
The Asian elephant on the mainland (Elephas maximus indicus) was once widespread from the Iranian coast to China and into SE Asia. Today though, this majestic animal has been extirpated from much of its former range due to habitat loss, degradation, and fragmentation - and poaching not just for ivory. Few individuals remain and those that do are found in highly fragmented populations. Some estimates peg total population size at roughly 41-52000, which includes a Bangladesh population size of 150–250; Bhutan 250–500; Cambodia 250–600; China 200–250; India 26,390–30,770; Indonesia 2,400–3,400; Lao PDR 500–1,000; Malaysia 2,100–3,100; Myanmar 4,000–5,000; Nepal 100–125; Sri Lanka 2,500–4,000; Thailand 2,500–3,200; and Viet Nam 70–150. The overall population trend of the Asian elephant has been downwards, probably for centuries. This remains the case in most parts of its range, but especially in most of the countries of South-east Asia. Within India, there is evidence that the large population in the Western Ghats in south of the country has been increasing in recent years due to improved conservation effectiveness (IUCN). Thailand is continuing its nationwide efforts to bring an end to the illegal ivory trade by extending the implementation of the National Ivory Action Plan. Thailand has been actively putting in place various measures to ensure the effective control of the domestic trade and possession of elephant ivory, and enhancing any enforcement efforts against the illegal ivory trade or possession of ivory. Work has also been carried out on establishing a DNA database of all domesticated elephants in the kingdom. In addition, in order to strictly control domesticated elephant ivory trade, the Elephant Ivory Act has been passed. New enhanced systems to register ivory possession and regulate the domestic trade have also been implemented and new public awareness materials aimed at tourists have been handed out and put on display nationwide (seen here at Bangkok Airport).
News and Research
How to help wildlife on holiday. Encounters with incredible animals in exotic locations top many people’s bucket lists, but there is a danger that your holiday of a lifetime experience could be exploiting vulnerable animals and habitats. Here's a smartphone app project called "Wildlife Witness" to avoid this and help counter wildlife trade.

Poachers are killing endangered Asian elephants for their skin and meat, not their tusks. ​Of the 19 elephants fitted with satellite GPS collars, seven were poached within a year. The toll rose the longer they investigated, with on-the-ground partners finding the mutilated carcasses of 40 additional elephants in systematic surveys across the southern-central region of the country. Sampson et al. 2018

Unprecedented Collaring Effort Aims to Protect Tanzania’s Threatened Elephants. In the past 40 years, rampant poaching of elephants for ivory has seen the population in Selous decimated, with numbers plunging to around 15,200 from 110,000. In 2014, UNESCO placed Selous on its List of World Heritage in Danger due to the severity of elephant poaching.