Greenpeace has recently called out Nestle, and others for failing to disclose if their palm oil is destroying rainforests. "With less than two years to go until 2020, deforestation to produce commodities such as palm oil shows no sign of slowing down. Corporate commitments and policies have proliferated, but companies have largely failed to implement them. As a result, consumer brands, including those with ‘no deforestation, no peat, no exploitation’ (NDPE) policies, still use palm oil from producers that destroy rainforests, drain carbon-rich peatland and violate the human rights of workers and local communities – making their customers complicit in forest destruction, climate change and human rights abuses. We called on them to disclose publicly the mills that produced their palm oil, and the names of the producer groups that controlled those mills. If disclosed, this information would show whether brands had forest destroyers in their supply chains. Eight CGF brands – Colgate-Palmolive, General Mills, Mars, Mondelēz, Nestlé, Procter & Gamble (P&G), Reckitt Benckiser and Unilever – were prepared to hold themselves accountable prior to publication of this report. The others – Ferrero, Hershey, Kellogg’s, Kraft Heinz, Johnson & Johnson, PepsiCo, PZ Cussons and Smucker’s – refused to reveal who produced their palm oil, thereby concealing the extent of their complicity in rainforest destruction." 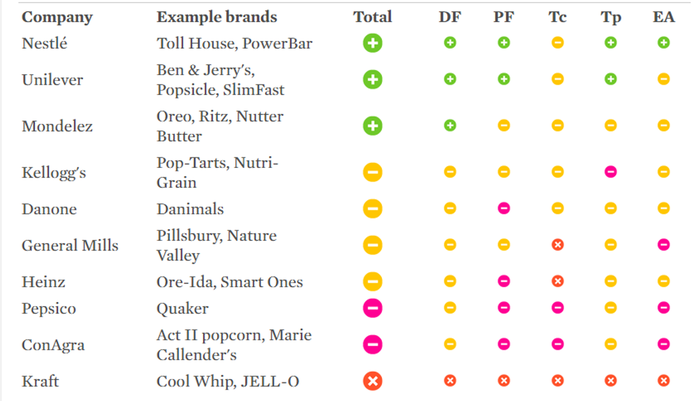