Endangered species threatened by unsustainable palm oil production
The world’s most popular vegetable oil—palm oil—is produced in tropical rain forests everywhere. While it can be produced sustainably, palm oil made with conventional production methods can lead to unchecked agricultural expansion that threatens forests and wildlife.

Indonesia and Malaysia produce more than 85% of the world’s palm oil and are the only remaining home to orangutans. Fewer than 80,000 of these animals survive today, their habitats under constant threat of deforestation. The population trend is in decline. The Bornean orangutan is native to the island of Borneo where it is present in the two Malaysian states of Sabah and Sarawak, as well as in three of the four Indonesian Provinces of Kalimantan.  The Bornean orangutan is a fully protected species in both Malaysia and Indonesia.

The rapid expansion of oil palm plantations in Borneo in response to international demand has accelerated habitat loss, leaving the orangutan vulnerable to poachers. Forest fragmentation further reduces the size of orangutan populations and makes them more prone to genetic drift and inbreeding as well as to local catastrophes, such as floods and fires etc.

The Sumatran orangutan (Pongo abelii​) is seriously threatened by logging (both legal and illegal), wholesale conversion of forest to agricultural land and oil palm plantations. Animals are also illegally hunted and captured for the international pet trade but this appears to be more a symptom of habitat conversion, as orangutans are killed as pests when they raid fruit crops at the forest edge.
Outside of the Leuser Ecosystem there are no other notable large conservation areas harbouring this species.
Sumatran orangutans may be the first Great Apes to become extinct with less than 6,000 remaining in the wild
​Sumatran orangutans have longer facial hair than the Bornean and are also reported to have closer social bonds than their Bornean cousins.  Females virtually never travel on the ground and adult males do so only rarely. This is in contrast to Bornean orangutans, especially adult males, which more often descend to the ground.​ 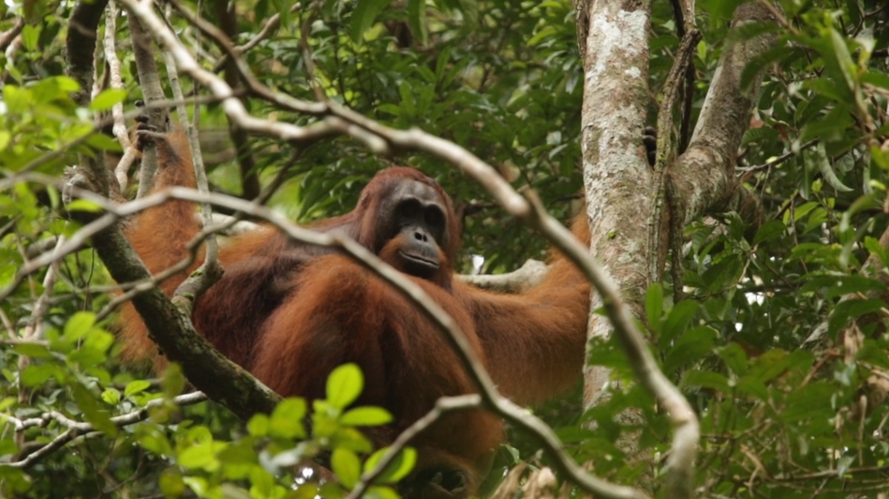 Fabulous video about orangutans, their culture, and the threats they face.

While Sumatra is home to several of the country’s largest national parks, many areas in these parks are still being torn down—illegally—to produce palm oil. Fewer than 3,000 elephants survive on the island, threatened by illegal palm oil production. The Sumatran elephant (Elephas maximus sumatranus) is one of three recognized subspecies of the Asian elephant, and native to the Indonesia island of Sumatra.

Threatened by habitat loss, degradation and fragmentation, and poaching; over 69% of potential elephant habitat has been lost within the last 25 years. Much of the remaining forest cover is in blocks smaller than 20 feet 250 km2 (97 sq mi), which are too small to contain viable elephant populations.
​
Elephants are often killed by poisoning.  Due to habitat loss and lack of food, elephants wander onto plantations and into villages and destroy crops.  Human, elephant conflict is becoming more common as habitat is cleared for oil palm.  Plantations and local villages often poison the elephants and snare traps are also set in the forests near the areas they are encroaching.   Tusks of the elephants are often removed to give the impression to authorities that the deaths were due to ivory trade rather than land encroachment.

Walt Disney himself couldn't have created a cuter elephant. Only 1,500 or so of these baby-faced animals still live on Borneo, an island where palm oil production continues to encroach on their habitat. The pygmy elephants of Borneo are baby-faced with over sized ears, plump bellies and tails so long they sometimes drag on the ground as they walk. They are also more gentle-natured than their Asian elephant counterparts.  The pygmy elephants of Borneo are the smallest elephants in Asia.

The Bornean Elephant is found in the Lower Kinabatangan floodplain in the state of Sabah, Malaysian Borneo and, occasionally, in the Indonesian state of East Kalimantan. Generally they are found in lowland forest, which in the Kinabatangan is seasonally inundated with floodwaters.

It is thought that these elephants might be descendants of a population of Javan elephants, brought over to Borneo by the Sultan of Sulu. Since the Javan elephant was hunted to extinction on Java and Sulu during the 19th century, this makes the Bornean Elephant of great conservation interest.  Bornean Pygmy Elephants have also been found to be poisoned in the vicinity of oil palm plantations

These smallest rhino are also the closest living relatives to the now-extinct woolly rhinos. Their population is unstable, threatened by poaching as well as the destruction of their habitat by unsustainable palm oil production. The Sumatran rhinoceros, also known as hairy rhinoceros or Asian two-horned rhinoceros.  The Sumatran rhino is a mostly solitary animal except for courtship and offspring-rearing. It is the most vocal rhino species and also communicates through marking soil with its feet, twisting saplings into patterns, and leaving excrement.

Females reach sexual maturity at around 4 years of age, and males are sexually active by around 7 years old.  Sumatran rhinos will have a single calf every 4-5 years.  They start nibbling from the food hanging from the mother’s mouth at an early age to learn which plants are good to eat, but may continue to suckle up to the age of 13-15 months.

The Sumatran rhino lives in dense tropical forest, in both the lowlands and highlands. Sumatran rhinos are very well adapted to life in very dense tropical forests. They are primarily attracted to areas with plentiful food resources. Members of the species once inhabited rainforests, swamps, and cloud forests in India, Bhutan, Bangladesh, Myanmar, Laos, Thailand, Malaysia, Indonesia, and China. In historical times, they lived in southwest China, particularly in Sichuan. They are now critically endangered, with only five substantial populations in the wild: four on Sumatra and one on Borneo. Their numbers are difficult to determine because they are solitary animals that are widely scattered across their range, but they are estimated to number fewer than 100 remaining in the wild.
​
​The biggest threats for Sumatran rhinos is poaching. Sumatran rhinos are poached for their horn, and the loss of their habitat occurs for human agricultural development leaving them vulnerable to poachers.  Over the centuries, the Sumatran rhino had been exterminated over most of its range, though in many places suitable habitat remains.

They are the smallest of all the tigers, its stripes are narrower than in other tiger subspecies and it has a more bearded and maned appearance. Adult tigers are basically solitary animals that maintain relatively separate territories, however some overlapping occurs in tiger ranges.  Cubs are typically born in a secluded area central to the female’s home range. Up to five or six cubs may be born, but more commonly it is two or three. Only one or two cubs from a litter generally survive the first two years of life. Cubs are born blind and depend exclusively upon their mother for nourishment for the next five or six months.
​
​The main threat to the Sumatran tiger is habitat loss and poaching.  A substantial market remains in Sumatra and the rest of Asia for tiger parts and products. Sumatran tigers are losing their habitat and prey fast, and poaching shows no sign of decline.
Article: Sumatran tiger survival threatened by deforestation despite increasing densities in parks

The Sunda clouded leopard is the largest cat in Borneo, and has a stocky build.  Its coat is marked with irregularly-shaped, dark-edged ovals which are said to be shaped like clouds, hence its common name.

The population status of Sunda clouded leopards in Sumatra and Borneo has been estimated to decrease due to forest loss, forest conversion to oil palm, illegal logging, encroachment, and possibly hunting. In Borneo, forest fires pose an additional threat.  It is estimated that fewer than 10,000 remain in the wild.
​
The forests of Borneo and Sumatra are undergoing some of the world’s highest deforestation rates, largely as the result of the expansion of oil palm plantations, and thus such development and consequent loss of habitat, coupled with the species’ apparent low population size, probably constitute the greatest threat to this species.

Pangolins or scaly anteaters are a group of unusual mammals with tough, protective keratin scales. Specialised for feeding on ants and termites, they occupy a niche equivalent to that of the American anteaters. The Sunda pangolin possesses long, powerful claws, for ripping open ant and termite nests, and a long, thin, sticky tongue which can measure up to 40 cm in length, for scooping up its prey. The species is heavily hunted both within China and its other range states, for its meat, which is considered a delicacy, as well as for its skin and scales which are used in traditional Chinese medicine.

Found in primary and secondary forest, and in cultivated areas including gardens and plantations, including near human settlements.
Habitat destruction and degradation resulting from human activities may also be having a negative impact. Although the species has been reported to occur in secondary forest, evidence suggests that the availability of tree hollows, which is higher in undisturbed forest, is extremely important for this species.

​There is virtually no information available on population levels of any species of Asian pangolin and no comprehensive population estimates. This species is rarely observed, principally because of its increasing rarity, but also because it is secretive, elusive and primarily nocturnal.