Estee Lauder Palm Oil Scorecard: Ranking America’s Biggest Brands on Their Commitment to Deforestation-Free Palm Oil
Greenpeace has recently called out Estee Lauder, and others for failing to disclose if their palm oil is destroying rainforests. "With less than two years to go until 2020, deforestation to produce commodities such as palm oil shows no sign of slowing down. Corporate commitments and policies have proliferated, but companies have largely failed to implement them. As a result, consumer brands, including those with ‘no deforestation, no peat, no exploitation’ (NDPE) policies, still use palm oil from producers that destroy rainforests, drain carbon-rich peatland and violate the human rights of workers and local communities – making their customers complicit in forest destruction, climate change and human rights abuses. We called on them to disclose publicly the mills that produced their palm oil, and the names of the producer groups that controlled those mills. If disclosed, this information would show whether brands had forest destroyers in their supply chains. Eight CGF brands – Colgate-Palmolive, General Mills, Mars, Mondelēz, Nestlé, Procter & Gamble (P&G), Reckitt Benckiser and Unilever – were prepared to hold themselves accountable prior to publication of this report. The others – Ferrero, Hershey, Kellogg’s, Kraft Heinz, Johnson & Johnson, PepsiCo, PZ Cussons and Smucker’s – refused to reveal who produced their palm oil, thereby concealing the extent of their complicity in rainforest destruction." 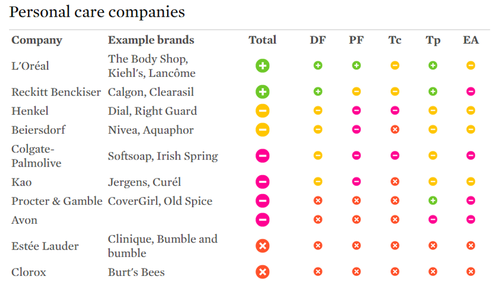 But two of these companies’ suppliers, Arma International and Pacific Oils and Fats, are controlled by the Hayel Saeed Anam Group. PepsiCo, Mars and Unilever purchased palm oil from the Arma International, according to lists of suppliers released by the food producers. And Nestlé said that it bought palm oil from Pacific Oils and Fats. Full article

WWF has said the best way to protect endangered animals and the habitats where they live is for retailers and manufacturers to commit to using only sustainably certified palm oil. This is where palm oil manufacturers have to follow specific criteria to reduce the negative impacts of palm oil cultivation on the environment and communities.

However, Friends of the Earth, said the scheme is open to abuse. “While there are palm oil certification schemes in place, these are not legally accountable and don’t necessarily guarantee that the palm oil used in products is sustainably sourced,” she explained. “For far too long, the palm oil industry and governments have failed to clean up the supply chain. Instead of voluntary certification we urgently need laws strong enough to protect rainforests, their precious wildlife and local communities.”

While people wanting to take action may be daunted by the sheer breadth of products containing palm oil, there are things they can do to help. “Putting pressure on those companies using palm oil in their supply chains, and choosing to buy fresh ingredients rather than processed foods are two of the steps people can take towards a future free of damaging palm oil,” Oxborrow explained.
​
According to the Rainforest Foundation, brands such as Booja Booja, Divine, Earth Friendly Products, Ecozone, Essential Care, Honesty Cosmetics and Little Satsuma are all ‘palm oil free’.