Fishing is contributing to the catastrophic decline of ocean species. As with many wildlife species, the act of fishing itself isn't inherently bad. Rather, unsustainable harvesting of fish stocks which aren't allowed to replenish themselves is causing irreparable harm, leading to over-fishing. And before you worry that increased regulation of the seas would have devastating consequences for small fisherman, note that the most of the fishing that occurs in developed countries is attributed to corporations who run massive fleets and make billions. Case in point, it was revealed last year that 29% of the UK’s haul is a result of five families, all of whom are exceptionally wealthy (Dowler 2018).  A single Dutch company which operates a vast fleet of vessels contributes another 24% of UK's take. Whereas your mom and pop trawlers – less than 10m long – are only taking 2% of all hauls despite making up more than 79% of the fleet (Monbiot 2019).

The number of overfished stocks globally has tripled in half a century and today fully one-third of the world's assessed fisheries are currently pushed beyond their biological limits, according to the Food and Agriculture Organization of the United Nations. Overfishing is closely tied to bycatch—the capture of unwanted sea life while fishing for a different species. This, too, is a serious marine threat that causes the needless loss of billions of fish, along with hundreds of thousands of sea turtles and cetaceans. 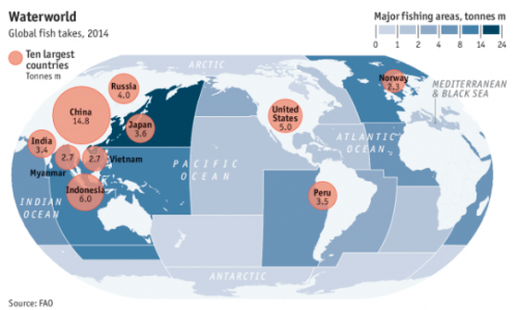 References
Dowler 2018. Revealed: the millionaires hoarding UK fishing rights. Unearthed.
Monbiot 2019. Stop eating fish. It’s the only way to save the life in our seas. The Guardian
Proudly powered by Weebly